Memorial Day Inspirational Quotes: Inspire yourself and other on this Memorial Day with inspirational and motivational quotes. Presenting you a bunch of best inspiring quotations that you can use on this patriotic event on your Facebook or Whatsapp status. This day comes once in a year so you must make it so special that you won’t forget it. Although there are Memorial Day sayings and messages available over here but this inspirational thoughts are also helpful. It is a day to honor the Armed Forces of the United States. There are many ways of dedicating this day to the National Heroes and using such quotations is also one of them.

Let’s start the quotations collection with the inspiring quotes that you can send to your friends. I hope you and your buddies are using the social network because these quotations can be shared on such platforms. 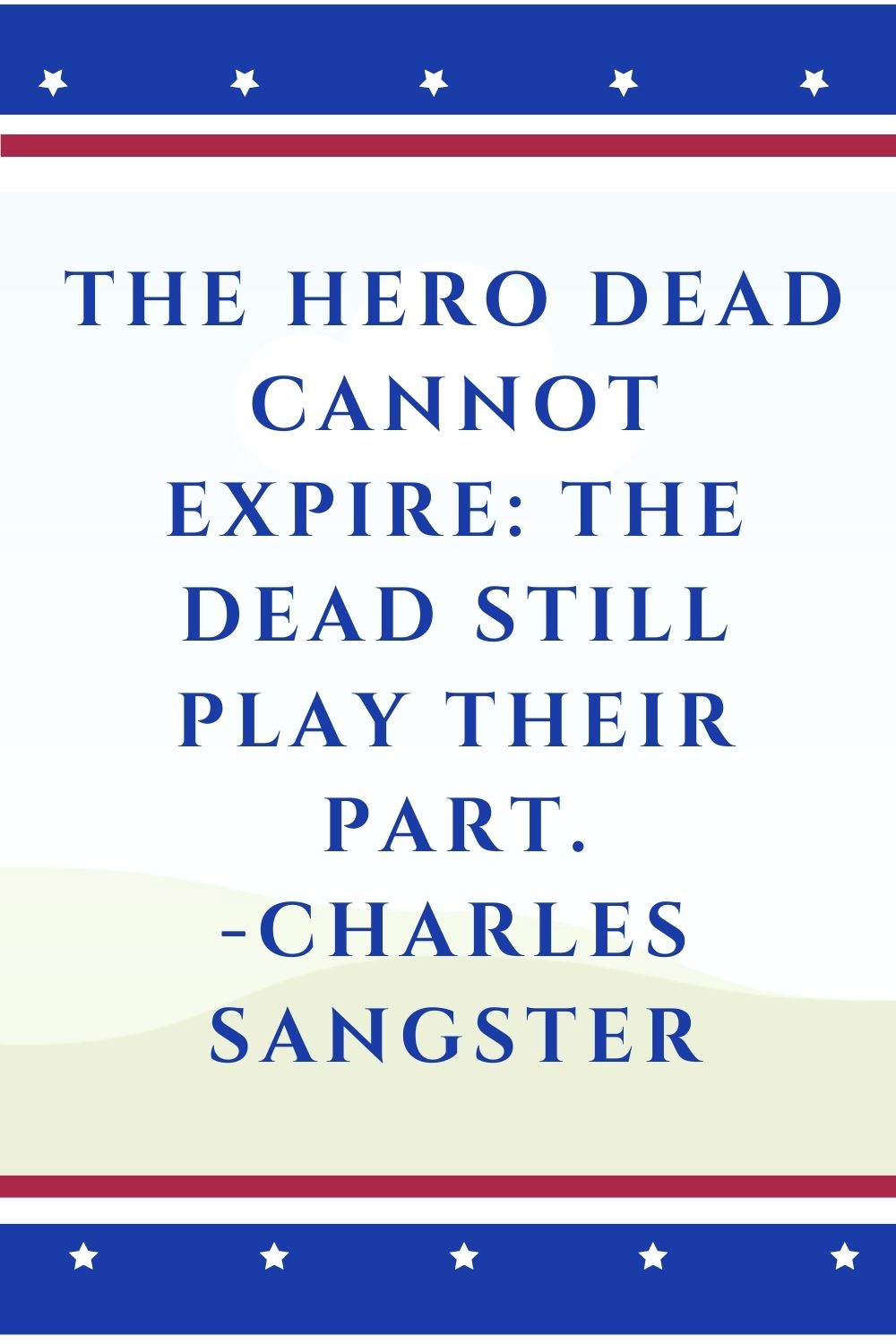 How important it is for us to recognize and celebrate our heroes and she-roes! – Maya Angelou

Knights of the spirit; warriors in the cause Of justice absolute ‘twixt man and man. – Richard Watson Gilder

For death is no more than a turning of us over from time to eternity. – William Penn

They hover as a cloud of witnesses above this Nation. – Henry Ward Beecher

The story of America’s quest for freedom is inscribed on her history in the blood of her patriots. – Randy Vader

Patriotism is not short, frenzied outburst of emotion, but the tranquil and steady dedication of a lifetime. – Adlai Stevenson

The willingness of America’s veterans to sacrifice for our country has earned them our lasting gratitude. – Jeff Miller

Over all our happy country – over all our Nation spread, is a band of noble heroes– is our Army of the Dead. – Will Carleton

A hero is someone who has given his or her life to something bigger than oneself. – Joseph Campbell

It is foolish and wrong to mourn the men who died. Rather we should thank God such men lived. – George S. Patton

Now, send the motivational thoughts to someone who is very special to you. In other words, send these quotations to your loved ones who are currently very far from you. Take a look at this collection and try out these ones. 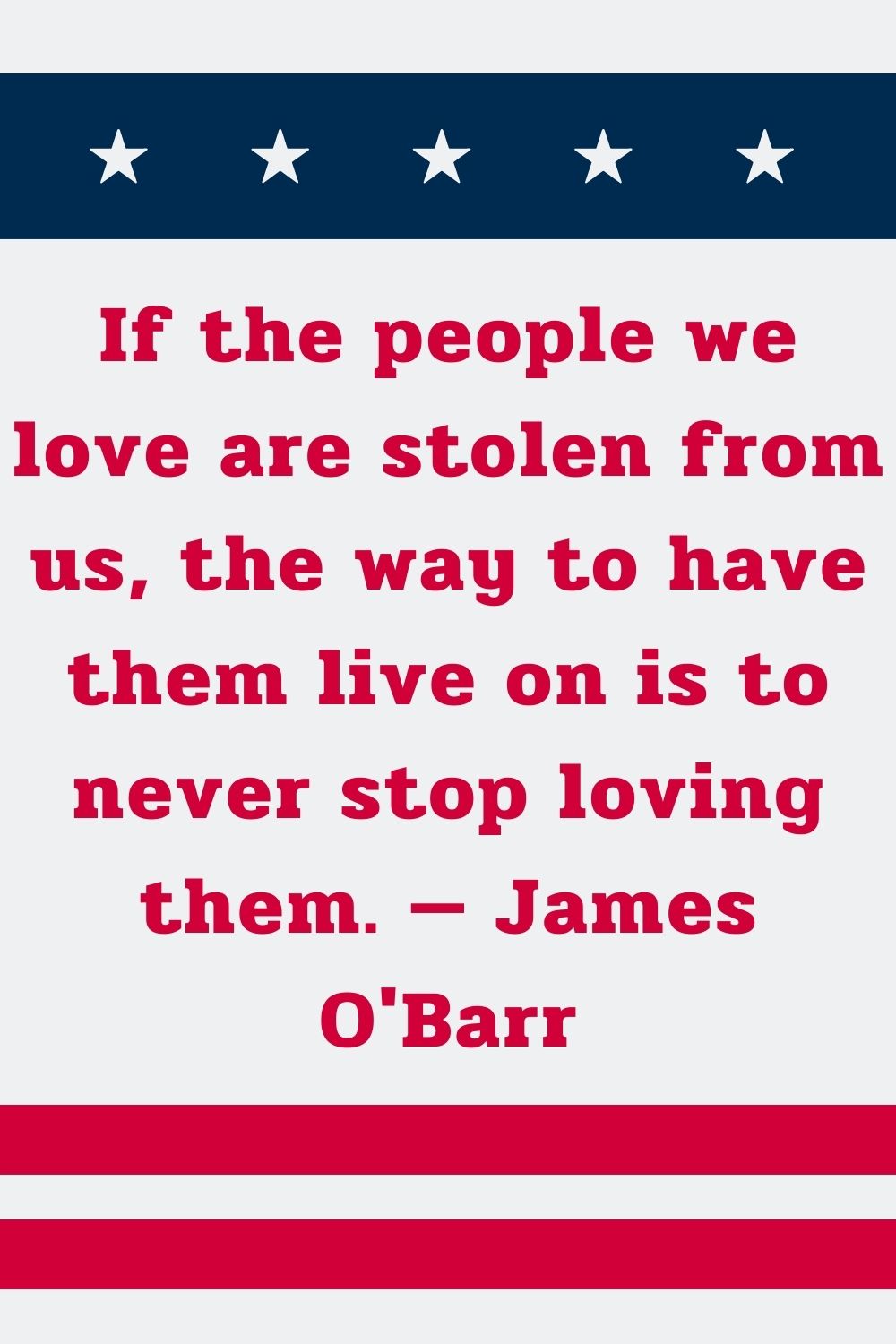 If the people we love are stolen from us, the way to have them live on is to never stop loving them. — James O’Barr

We bereaved are not alone. We belong to the largest company in all the world — the company of those who have known suffering. — Helen Keller

We must embrace pain and burn it as fuel for our journey. — Kenji Miyazawa

Sacrifice is a part of life. It’s supposed to be. It’s not something to regret. It’s something to aspire to. ― Mitch Albom

Our nation owes a debt to its fallen heroes that we can never fully repay, but we can honor their sacrifice. –Barack Obama

There is nothing wrong with America that cannot be cured with what is right in America. William J. Clinton

I love America more than any other country in this world, and, exactly for this reason, I insist on the right to criticize her perpetually. James Baldwin

A man’s country is not a certain area of land, of mountains, rivers, and woods, but it is a principle and patriotism is loyalty to that principle. George William Curtis

Grief is not a disorder, a disease, or a sign of weakness. It is an emotional, physical and spiritual necessity, the price you pay for love. The only cure for grief is to grieve. — Earl Grollman

I still miss those I loved who are no longer with me but I find I am grateful for having loved them. The gratitude has finally conquered the loss. — Rita Mae Brown

If you have ever lost a loved one, then you know exactly how it feels. And if you have not, then you cannot possibly imagine it. — Lemony Snicket 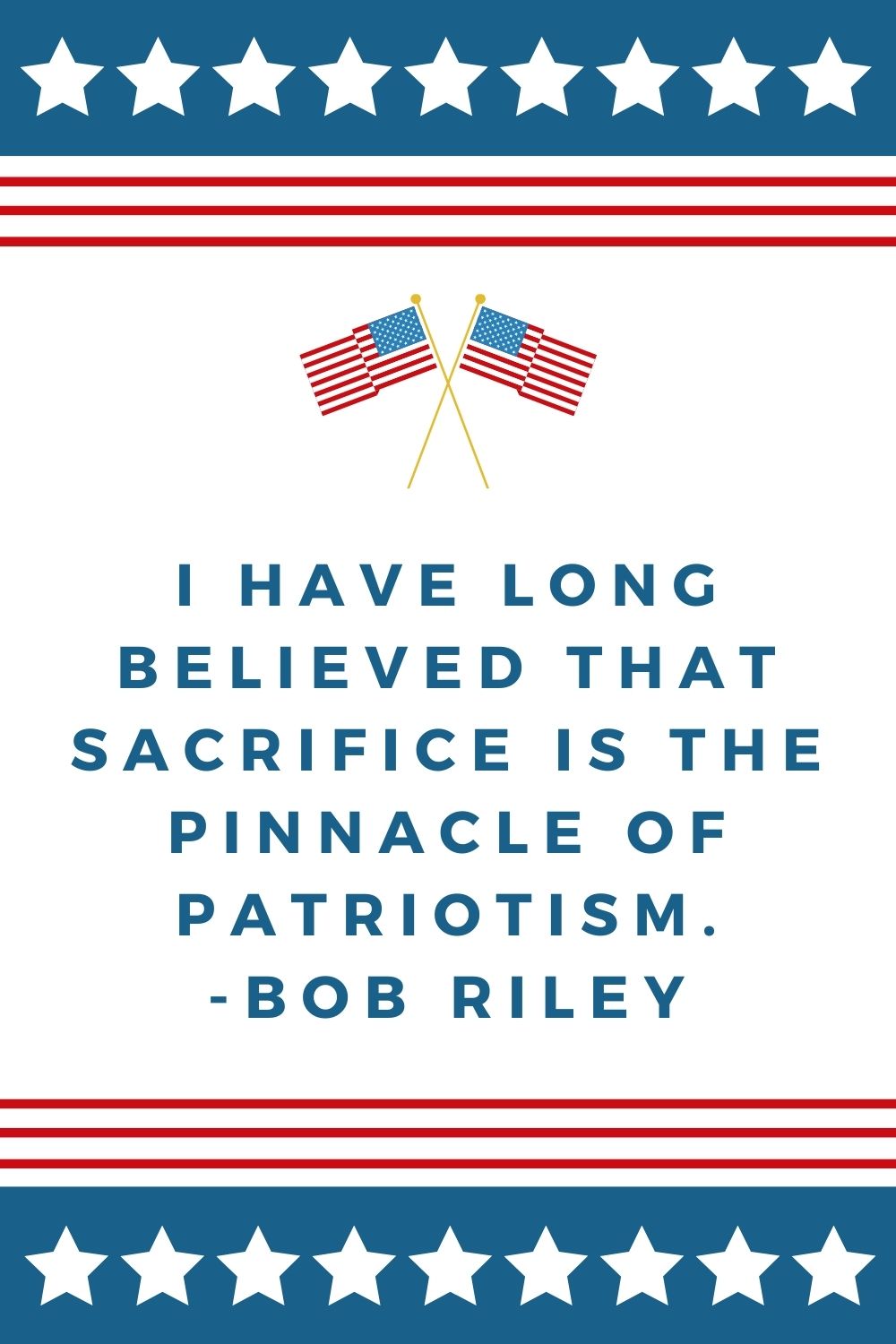 America without her soldiers would be like God without His angels. – Claudia Pemberton

Patriotism is not short, frenzied outbursts of emotion, but the tranquil and steady dedication of a lifetime. – Adlai Stevenson II

How important it is for us to recognize and celebrate our heroes and she-roes!—Maya Angelou

Patriotism is supporting your country all the time, and your government when it deserves it.—Mark Twain

Freedom makes a huge requirement of every human being. With freedom comes responsibility.—Eleanor Roosevelt

I love America more than any other country in the world, and exactly for this reason, I insist on the right to criticize her perpetually.—James Baldwin

Never in the field of human conflict was so much owed by so many to so few. – Sgt. Major Bill Paxton

The legacy of heroes is the memory of a great name and the inheritance of a great example. – Benjamin Disraeli

Courage is almost a contradiction in terms. It means a strong desire to live taking the form of readiness to Die.- G. G. Chesterton

This nation will remain the land of the free only so long as it is the home of the brave. – Elmer Davis

Veterans are a symbol of what makes our nation great, and we must never forget all they have done to ensure our freedom. – Rodney Frelinghuysen

So long as the memory of certain beloved friends lives in my heart, I shall say that life is good.—Helen Keller

A battle lost or won is easily described, understood, and appreciated, but the moral growth of a great nation requires reflection, as well as observation, to appreciate it.—Frederick Douglass

I had reasoned this out in my mind, there was one of two things I had a right to, liberty or death; if I could not have one, I would have the other.”—Harriet Tubman 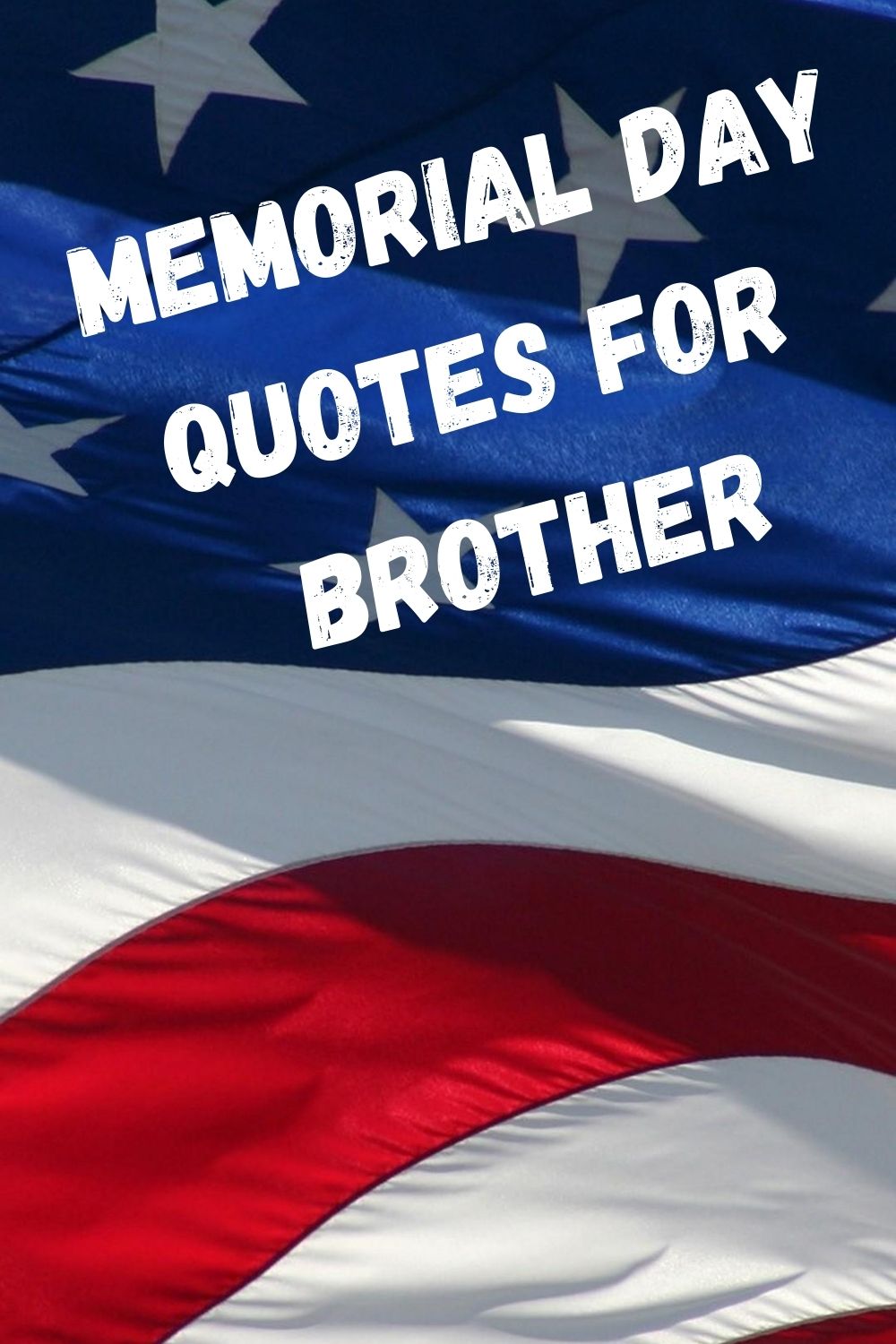 Patriotism is when love of your own people comes first; nationalism, when hate for people other than your own comes first.

To all the fallen soldiers who sacrificed their lives for protecting the motherland, thank you so much for priceless contribution and unflinching patriotism.

Memorial Day is a time to honor, reflect, and remember those who have made the ultimate sacrifice for their country.

Every soldier who died for the country was a blessing from God. They came on Earth us to save our lives. Happy Memorial Day to you and your family on the day which honors the brave.

I would rather be remembered by a song than by a victory. – Alexander Smith

And I’m proud to be an American, where at least I know I’m free. And I won’t forget the men who died, who gave that right to me. – Country singer Lee Greenwood

Those who have long enjoyed such privileges as we enjoy forget in time that men have died to win them. – Franklin D. Roosevelt

A man’s country is not a certain area of land, of mountains, rivers, and woods, but it is a principle and patriotism is loyalty to that principle. – George William Curtis

To those in uniform serving today who have served in the past, we honor you today and every day.

The willingness of America’s veterans to sacrifice for our country has earned them our lasting gratitude. – Jeff Miller

As America celebrates Memorial Day, we pay tribute to those who have given their lives in our nation’s wars. – John M. McHugh

Brace yourself for some inspirational quotations that you can use on Facebook, Whatsapp, Instagram and other social networks. You can use these sayings as captions or messages or status updates on your profile to remember and honor the heroes.

To be free is not merely to cast off one’s chains, but to live in a way that respects and enhances the freedom of others. — Nelson Mandela

They loved their country so deeply, so profoundly, that they were willing to give their lives to keep it safe and free. – Barack Obama

No duty is more urgent than that of returning thanks. —James Allen

Our flag does not fly because the wind moves it. It flies with the last breath of each soldier who died protecting it.—Unknown

America was not built on fear. America was built on courage, on imagination, and an unbeatable determination to do the job at hand. — Harry S. Truman

“Never was so much owed by so many few.” – Winston Churchill

Home of the free, because of the brave. —Unknown

So these are the inspirational and motivational quotes on Memorial Day with some pictures as well. Use these quotations to make this day a special one by sharing them on Facebook, Whatsapp, Instagram, and other social networks.